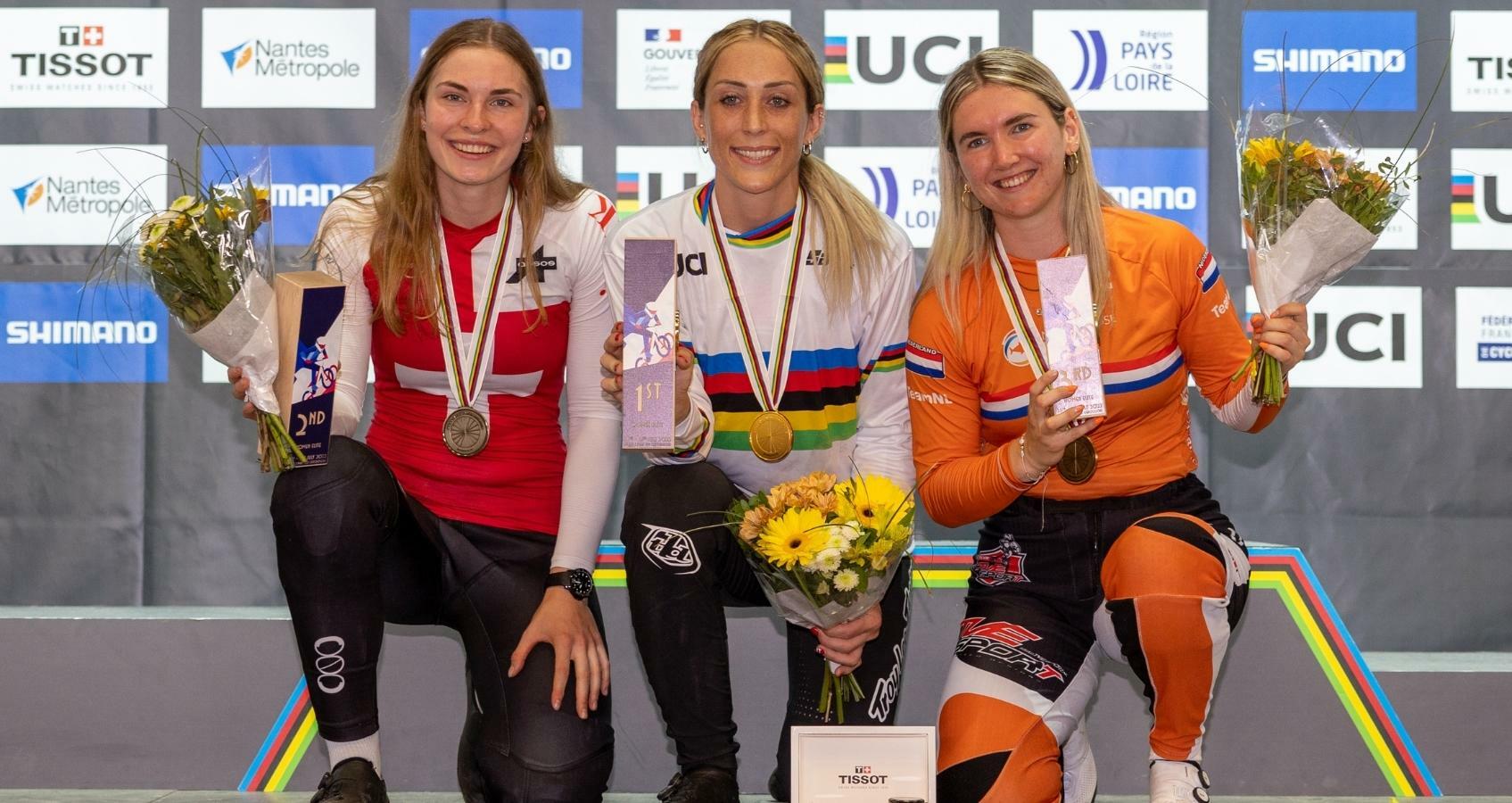 The Elite Women started their day with the semi-finals. Olympic silver medalist Willoughby was in the first semi coming strong out of the gate and riding right behind Olympic medalist Laura Smulders (NED). She stayed in second riding into the main event.

The rest of the women, Stancil, Payton Ridenour (Pottstown; Penn.; Mongoose Bicycles), and Daleny Vaughn (Tucson, Ariz.; DK Bicycles), were in the second heat. Stancil was in gate two and followed Zoe Claessens (SUI) and Olympic medalist Merel Smulders (NED) to the line. Vaughn and Ridenour did not make the final cut, but still beat out Olympic Champion and reigning World Champion Bethany Shriever (GBR).

It all came down to the main event with many of the race favorites including Willoughby and Stancil. Stancil pulled a power move out of the gate and was in the lead going into the first turn. Going down the second straight, Stancil had more than a bike length on her competitors, but Claessens powered through the rollers on the third straight and nearly caught Stancil. It came down to a photo finish, and Stancil took the win by inches. Claessens took second with Merel Smulders in third to round out the podium. Willoughby was just outside of the photo finish taking an impressive fourth place on the day.

Stancil was in complete shock as she crossed the finish line and was unsure if she won until she received confirmation from USA Cycling coach Jamie Staff. After the race she said, “I’m still taking it all in, but growing up the World Championships meant so much to me. I won my second world title at 10 years old in France so this place is already special to me. At the beginning of the year, I had my worst injury and I’ve only been cleared for 3 months now, so I am still in shock. This is my first elite world title in my career and it’s incredible… This is the one thing I have always wanted.”

Kamren Larsen (Bakersfield, Calif.; Haro Bikes) and Cameron Wood (Phoenix Ariz.; Mongoose/USA BMX Foundation) were the two men to make it into Sunday’s race. Larsen fought hard in the quarter finals, but was unable to take the final transfer spot. Wood was in second from the gate and put in a strong lap to make it into the semifinals. In the semis, Wood came out flying from gate three, but ended up in fifth coming out of turn one. Up and over the pro set, he was vying for the last transfer spot, elbow-to-elbow with fourth and went go for the bike throw at the line. He came up short by half a wheel and missed out on the Elite Men’s main event that he placed eighth in last year.

In the first-ever U23 World Championship, Spencer Cole (Palm Harbor, Fla.; DK Bicycles) was the only American to make it into the quarter finals. Unfortunately, Cole’s day ended there. Cole chose gate three with the rider from gate two crashing into the back of him as they went over the first jump. Both riders ended up on the ground with Cole able to walk off the track.

The USA’s only U23 woman, McKenzie Gayheart (Fort White, Fla.; Factory Full Tilt/ Radio) was vying for a main event spot. Gayheart had a great lap, but just came up short getting fifth in the semis. At 20-years old, Gayheart still has two more years in the new category, which debuted this year in the World Cup series.

Nolan Cardwell (Belmont, N.C.; Tangent/ Rift/ Rockstar Racing Team), PJ O’Brien (Punta Gorda, Fla.; Albe’s Bike Shop), Cutter Williams (Potomac Falls, Va.; Tangent/ Rift/ Rockstar Racing Team), and Ethan Popovich (Valparaiso, Ind.; DK Bicycles) were the four men to start the quarterfinals. Cardwell, O’Brien, and Williams were all placed in the same heat and needed to make it in the top four to proceed. O’Brien had a great lap finishing second, but Cardwelland Williams narrowly missed out finishing fifth and sixth. Popovich got second out of the gate and stayed there making his way into the semifinals.

The semifinals were full of crashes for the Junior Men. In Popovich’s heat, there was a crash in turn one. He managed to get around unscathed, but was unable to transfer to the main. Popovich was one of the youngest in his category, turning 17 today, and competing in his first international trip. He was one of only two first year Juniors to make it to the semifinals.

In O’Brien’s heat, he fought for the final transfer spot to the main event when a rider hit him from behind going over the pro set on the second straight. He walked off the track okay, but it unfortunately meant he was not able to proceed to the semis.

Even though the World Championships are complete, the racing doesn’t stop. The BMX Racing World Cups will take a break until September, but many of the riders are headed right back to the U.S. to compete at the USABMX National in Salt Lake City next weekend.

Visit USACycling.org for more information about athletes, events, and membership programs. Follow @USACycling across all channels for the latest on Team USA.

Surfing the biggest growth sport among women in Australia