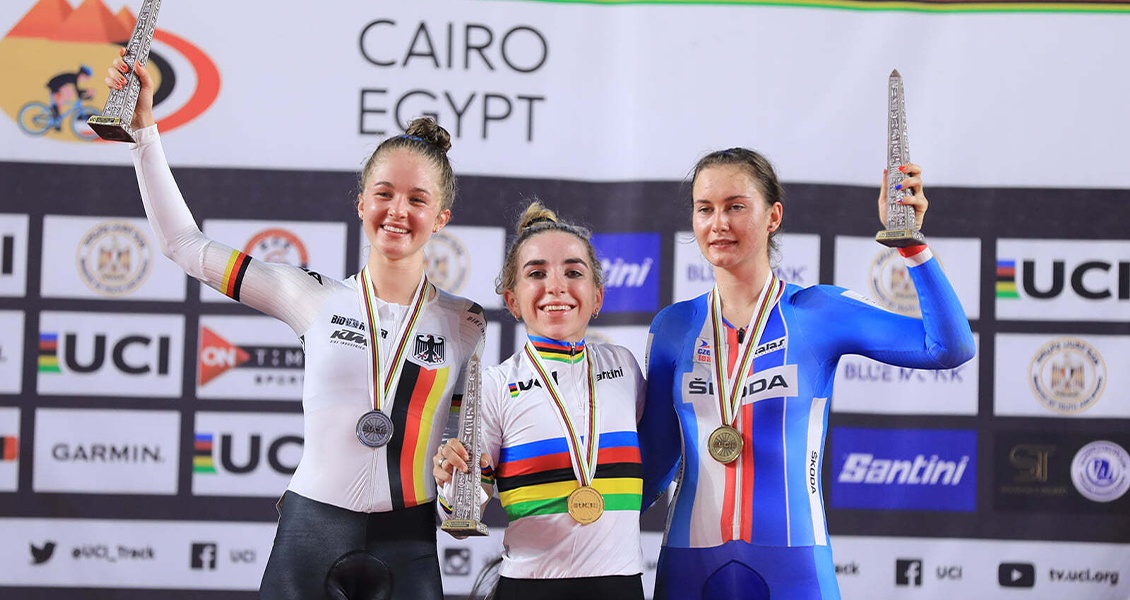 Talking about taking the first step of the podium, Schmid said, “It feels truly unbelievable to win my first World Championship title here in Cairo. I don’t think it’s even sunk in yet.”

The elimination race, also known as the miss-n-out, is all about tactics, making sure you’re not last across the line, but also getting some rest. Schmid explained her tactics, saying, “Starting at the back of tonight’s race made it difficult to get to the front, but I did everything I could to get to the front early on and put the other girls under pressure. I had a plan, I worked hard to execute on it, and things came together perfectly to grab the rainbow jersey.”

Racing against competitors from 21 different countries, Schmid was staged at the back of the group for the start. Within two laps, she positioned herself within the front five riders of the race to better control the action. Schmid remained at the front for most of the race, not leaving the front on an elimination lap. The final sprint of the event came down to Schmid against German rider Lana Eberle, and that’s when she put on the afterburners, out sprinting Eberle to win the race. This is Schmid’s second event of the competition. She placed fourth in the scratch race on Wednesday.

Mia Deye (Geigertown, Pa.; Star Track Racing) also had a strong showing today, racing the Junior Women’s Sprints. In the 200-meter qualification, she stopped the clock with an 11.687, a personal best for her. The time would also slot her into fourth seed going into the sprint rounds and give her a bye in the first rounds of sprinting. Deye moved through her following three rides undefeated, pushing her into the semifinals, which will take place on Friday, during the evening session. This is the first time the U.S. has had a chance to win a Sprint medal since 2011 when Matthew Baranoski won Silver in the Junior Men’s Sprints.

Dakota Stein (Orwigsburg, Pa.; Sprinter’s Edge) started his first event, the Junior Men’s Scratch. In the morning session, Stein raced smart in his heat, staying calm under pressure, and placed seventh, moving him forward into the finals in the evening. During the finals, Candian rider Carson Mattern took a lap on the field and earned him the event’s win. Stein would duplicate his effort from the heat earlier in the day and take seventh place.

Finn Koller (Bethlehem, Pa.; Sprinter’s Edge) represented Team USA in the Junior Men’s Keirin. Koller put in a solid ride in Round 1 but was outsprinted at the line and placed third. This would move him into the repechage ride. In the repechage ride, Koller would again ride well but place third, ending his racing in the keirin.

On Friday, Schmid takes on her big event, the Omnium. Then, Deye will continue in the Women’s Sprint tournament with the semifinals. For the men, Koller will start the Junior Men’s Sprints, and Steintakes on the Points Race.

Visit USACycling.org for more information on the athletes, events, and membership programs, and follow @USACycling across all channels for the latest on Team USA.

View all Releases by Sportswire Women