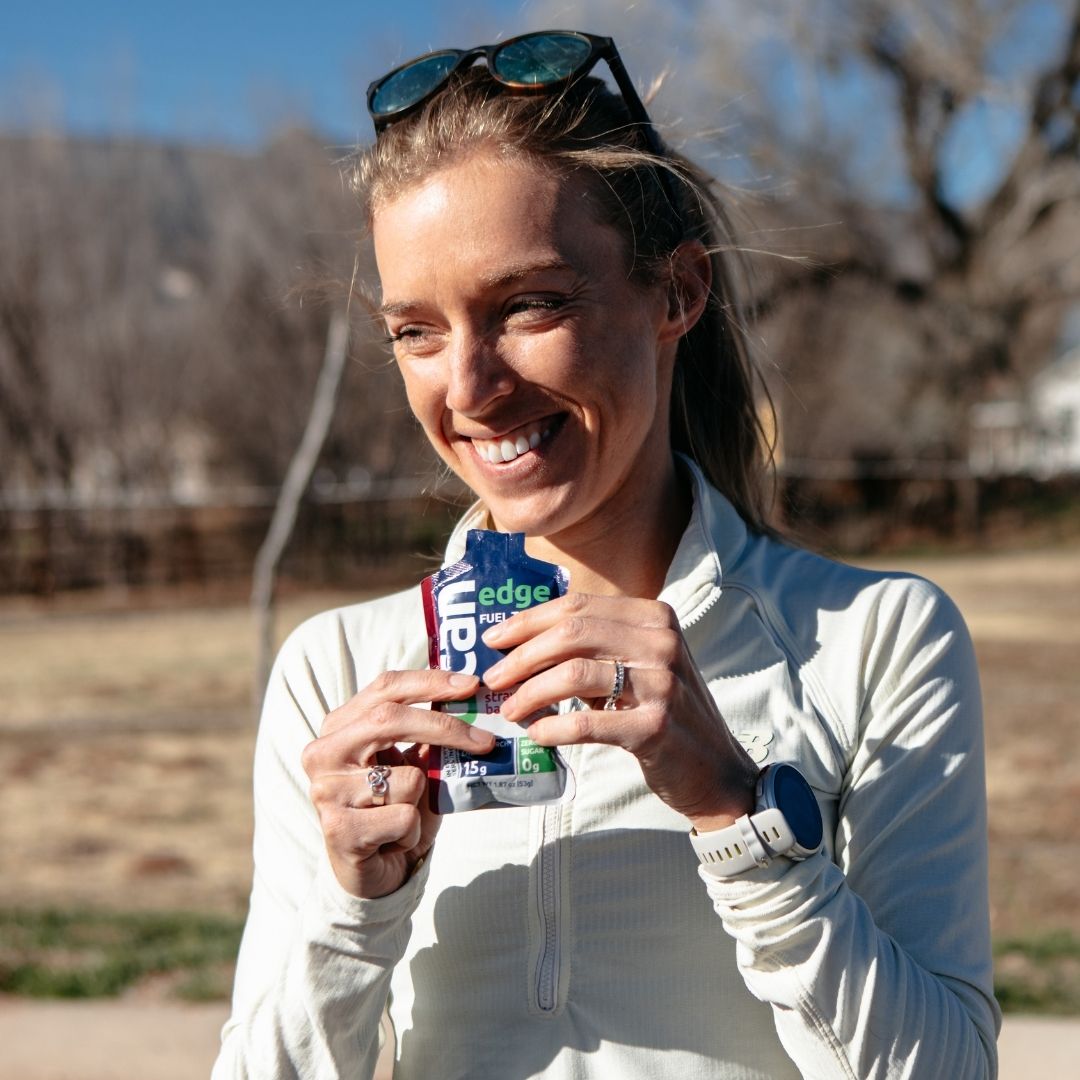 /SPORTSWIRE WOMEN/ – A few months ago, Olympian Emily Sisson shared her excitement around the competitiveness that currently exists in U.S. women’s distance running. “Every single race, I feel like people are going after records,” she said. “It kind of makes everyone raise their game.”

Now, she’s at the top of the game. Sisson set the American Women’s Half Marathon record at the USATF Half Marathon Championships in Indianapolis, running 1:07:11 and breaking fellow Team UCAN athlete Sara Hall’s 4-month old record set in January by 4 seconds. Sisson’s half marathon record is pending official ratification by the USATF Records Committee.

A big part of Emily’s preparation to get race ready was to find a fueling solution that supported her training. “UCAN has helped me achieve my goal of fueling better,” says Sisson.

Her biggest challenge with fueling had been finding something that went down easy. Since adding UCAN to her routine last year, she no longer has to worry about GI issues. “I’ve really struggled with taking in bottles and gels during long runs because I have a really sensitive stomach,” Sisson says. “I find UCAN sits really well and there’s no GI distress.”

She’s also noticed a big difference with UCAN when it comes to recovery and post-workout energy. “Before UCAN, I used to crash and burn, especially after my long runs. I’d be starving after a long workout and want a lot of sugary food. With the UCAN Energy + Protein, I don’t feel that anymore. It really helps hold me over after a workout until I can have a substantial meal.”

Her record-setting run is the latest in a string of victories for Sisson. She won the USATF 15K Championships earlier this year and was the top American at the 2021 Tokyo Olympics in the 10,000m. She also holds the record for the fastest marathon debut by an American on a record-eligible course.

With Sisson, Hall and Emma Bates, UCAN has 3 of the top 5 fastest active American women’s marathon runners on the team. 31 of the participants at the 2020 U.S. Olympic Marathon Trials also relied on UCAN to optimally fuel their journey – a diverse group of athletes including women working full-time as radiologists, teachers, occupational therapists and more.

They’re part of a growing number of women athletes who rely on UCAN to be at their best, including 5x U.S. Olympic gold medalist and Team USA Water Polo Captain Maggie Steffens and 2x Olympic medalist & pro triathlete Katie Zaferes.

“Women frequently find themselves on a tightrope after exercise,” explains Dr. Cathy Yeckel, human metabolism researcher and Assistant Clinical Professor at Yale University. “If blood sugar dips too low there is a strong drive to eat whatever is handy. UCAN helps steady and sustain blood sugar, giving the time to make smart nutritional choices.”

Whether you’re an athlete who needs energy to power you through your workouts and competitions, or an active woman looking to manage your fitness and health goals, UCAN provides a reliable solution with its steady supply of efficient calories to meet your energy needs.

Learn more about how Emily Sisson fuels with UCAN and check out her favorite products at ucan.co/emily

Based in the US, UCAN is a company that’s changing the way you think of energy – with food products that provide athletes and active people the foundational energy insurance that they can rely on to achieve their performance and fitness goals. UCAN products utilize LIVSTEADY™, a slow-releasing, low glycemic carbohydrate that delivers steady, long-lasting energy without sugar. This patented energy source is unique to UCAN products and was originally created to help a child with a rare metabolic disorder maintain stable blood sugar. UCAN Edge, Energy Pouches, Powders, Energy Mix and Energy Bars are trusted by over 400 pro and college teams, Olympians, elite endurance athletes, thought leaders in health and performance, and recreational athletes, all seeking a healthy way to unlock peak performance. Learn more at ucan.co, and get the latest news in the UCAN world by following @GenUCAN on Facebook, Instagram and Twitter. UCAN nutrition products are currently available in powder, pre-mixed, energy mix, and bar formats, in a variety of flavors, at 350+ specialty run, bike and tri stores around the country, Lifetime gyms, and can be purchased online at ucan.co or on Amazon.