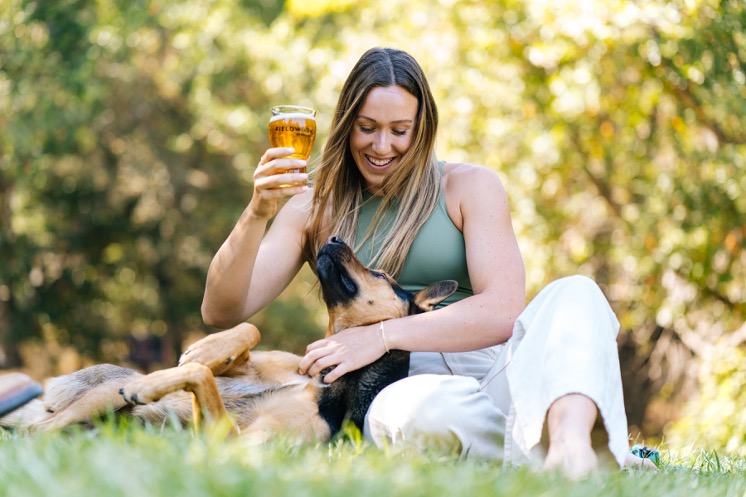 Berkeley, Calif. /SPORTSWIRE WOMEN/ – Fieldwork Brewing Company announces its partnership with two-time Olympian and four-time Olympic medalist Abbey Weitzeil as she trains to quality for her third U.S. Olympic Team. Fieldwork Brewing supports the acclaimed swimmer on her road to the Paris 2024 Summer Olympics, recognizing her relentless training and dedication to being a record-breaking athlete and community leader. Abbey is set to compete at the FINA Swimming World Cup 2022 (Indianapolis, Indiana) at The IU Natatorium on November 3 – 5, 2022. Interviews are available upon request.

A graduate of University of California, Berkeley (2016-2020), Abbey was awarded her first Olympic medals as a freshman in 2016. At the Rio 2016 Olympics, she swam the fastest split on the 4×100 Freestyle Relay, earning a silver medal and setting a new American Record, and Abbey helped Team USA earn a gold medal in the 4×100 Medley Relay. At the Tokyo 2020 Olympics, Abbey won a bronze medal in the 4×100 Freestyle Relay, becoming the first Cal athlete in any sport to win a medal at the 2020 Olympics. In the 4×100 Medley Relay, Abbey’s inspired performance helped capture the silver medal, her fourth career Olympic medal. In September 2021, Abbey broke her own American Record in the 50 freestyle (SCM) during the International Swim League competition. Abbey was the first woman in history to break the 21-second barrier in the 50-yard freestyle, and she held the American Record in the event from 2019 to 2022. Abbey is a 13x World Championship Medalist.

“I’ve been in the athletic community for a while now and we all train so hard it’s important to have a life outside the pool to create balance,” says Abbey Weitzeil. “There was a time in my career when my mind was focused on swimming 24/7, and I developed an unhealthy relationship with the sport to some extent. Since, I have learned to pursue passions and experiences away from swimming, which has been exciting and given me joy and more normalcy in my day to day. Being social and spending time with my friends and family is a huge part of my happiness. On my ‘off’ days from training or weekends, I love to bring my dogs and friends to Fieldwork Brewing for a tasty lager or pilsner and relax in the sunshine. It’s a very social, chill environment and gives me the opportunity to connect with things outside of professional sport.”

“We are honored to have the privilege of supporting Abbey Weitzeil as she gears up for the next Olympics,” says Barry Braden, CEO and Co-Founder of Fieldwork Brewing Company. “It’s really amazing to witness Abbey competing for our country and achieving tremendous results. Abbey is a wonderful human being with so much potential for greatness in the swimming pool. Anything we can do to help her on this journey, we are up for it.”

Abbey joins Fieldwork Brewing for a special “Guest Bartender” fundraising event at their new San Leandro location (100 West Juana Avenue) on Friday, December 9, 2022 (6pm – 9pm). Abbey pours pints of Fieldwork beers to help raise money for Hearts For Paws (LINK), a foster-based 501c3 rescue center out of Northern & Southern California that saves dogs and cats from high-kill shelters. Fieldwork Brewing and Abbey are both dedicated community advocates for the safety and well-being of animals and have previously partnered together at the Pints for Paws fundraising event for Berkeley Humane. Fieldwork is a longtime supporter of Pints for Paws.

Fieldwork’s latest releases can be enjoyed by sampler flight, beer by the glass, and filled “to go” in crowler cans. Special Release cans are available onsite and for delivery while supplies last at each location.