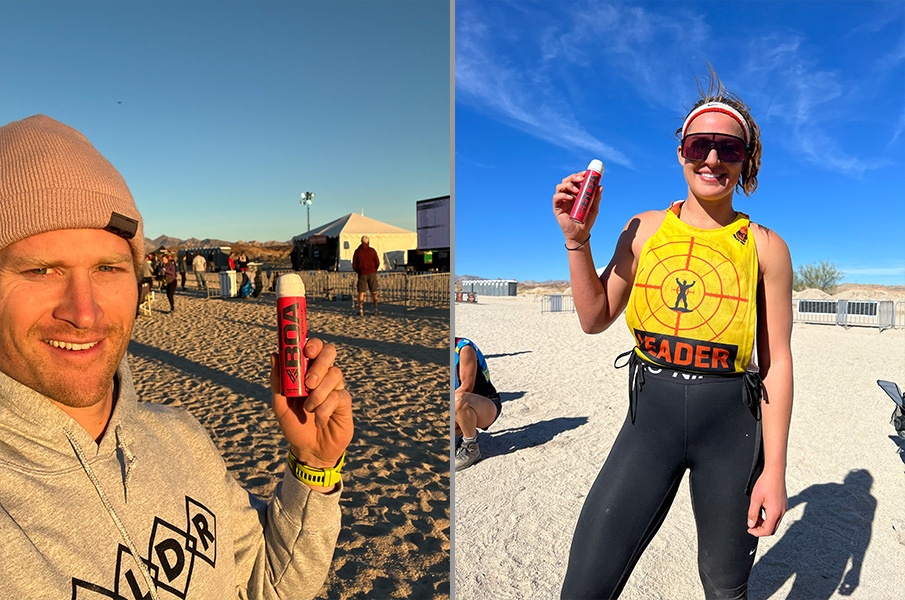 Hunter has also joined the company’s advisory board, after spending the last several months using BOA’s first product (ENDURE) in training and competition and helping the company with development of its next product (FUEL). ENDURE is a rapid sodium replacement product that helps athletes with their hydration strategy. FUEL is a fast-acting smart carb supplement that also provides vitamins and caffeine. Both products were developed to help athletes manage well-known problems.

Knight was using BOA’s ENDURE  during the 24-hour, 90-mile, Toughest Mudder Race. It was her first time participating in the event. “When you’re going all out with that level of exertion for a sustained period of time, it’s really difficult to keep up with the sodium loss,” remarked Knight. “If you burn sodium as fast as I do, you can’t drink your way back. BOA is so easy to use, I just took blasts throughout the race and didn’t even have to break stride. I’m not participating in any endurance events without BOA.”

When asked about BOA, McIntrye said, “I’ve seen every kind of supplement under the sun, but I have never seen anything like BOA. I’m a heavy sweater and I lose a ton of sodium in all of these crazy events and world records I’m trying to set. I bike with BOA, I run with BOA, and I always have it near me. I’m very excited not only to be using BOA but also to be working with the company on the development of future products. We are literally creating a whole new category of nutritional supplements that we believe can help solve lots of problems athletes experience.”

“We are delighted that Hunter and Katie chose to become an ambassador for the company,” stated Jon Pritchett, BOA Nutrition President & CEO. “Like all ambassadors of BOA products, we love the fact that they have real-world experience with using BOA in the most grueling circumstances. You can’t find many tougher environments than what these two athletes put themselves through on a weekly basis,”remarked Pritchett.

The company recently announced the signing of Duke University Basketball  player Wendell Moore, Jr.  Moore, the team’s leading scorer, who is featured in an ad campaign that began this week.

BOA Nutrition, Inc. is a sports nutrition and wellness company based in North Carolina. They develop unique products with novel ways to rapidly deliver essential nutrients so athletes of all ages and levels can optimize their performance. BOA’s objective is to provide athletes with fast-acting, concentrated, great-tasting, & convenient products to use no matter where, when, or what the sport. The company’s technology, and many other innovations from BOA, are protected by 18 provisional patents and a number of trade secrets. Follow BOA Nutrition, Inc. on Facebook, Instagram, LinkedIn and Twitter.

WNBA 2022 commercial guide: Every franchise, every sponsor, all the major TV deals