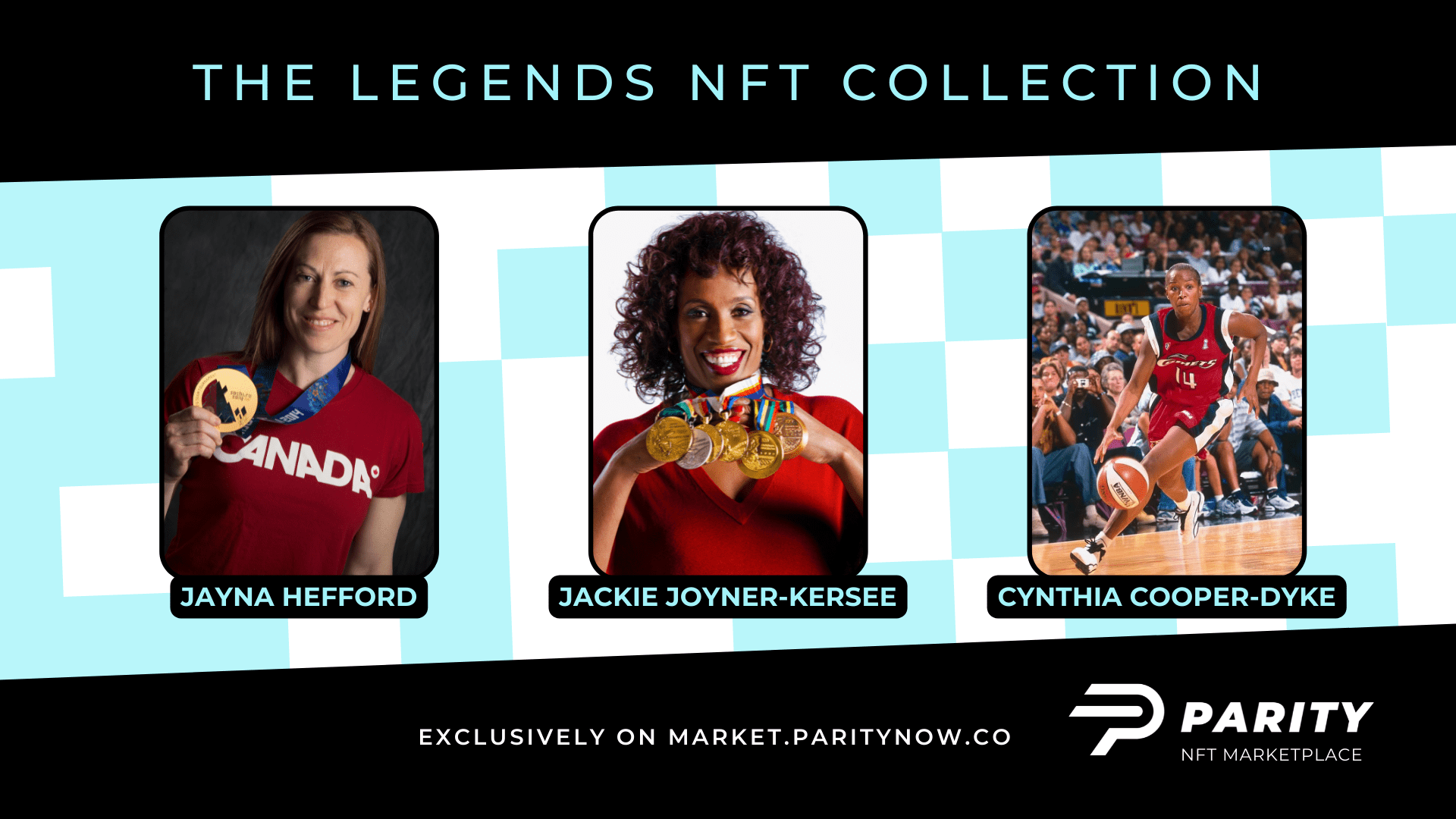 This revolutionary venture led by Parity offers athletes and artists a combined 90% of net revenue from initial NFT sales, as well as royalties from every secondary market sale, including sales decades into the future when athlete or artist may have grown in accomplishment and fame.

Parity has partnered with Aventus Network and its subsidiary, VereNFT, to create NFTs compatible with the Ethereum network but that can be transacted with orders of magnitude more speed, less cost, and greater environmental efficiency.

The artwork for these NFTs has been created by renowned artist Borbay, named a Most Creative New Yorker by Time Out New York. Among his many significant works are a series of paintings of the Guggenheim Museum and a portrait of Serena Williams. All Legend Collection NFTs will be single edition NFTs, i.e., “one of one.”

Joyner-Kersee’s NFT auction will run January 23 from 7:00PM – 11:00PM ET, with Hefford’s and Cooper-Dyke’s to follow in subsequent weeks. All auctions will take place in USD and be purchasable with credit card on the Parity NFT Marketplace, where fans will also find a growing number of NFTs celebrating women athletes from the Parity community.

“The Parity NFT Marketplace will — for the first time in cryptocurrency — put women athletes at the forefront of technology, business and sport, rather than having them as an all-too common afterthought,” said Minji Ro, Co-CEO of Parity.

“The Aventus team understood the ambitious scope of our vision from the outset, and their technical knowledge is unmatched. The Parity Legends Collection is an exciting beginning to our collaboration.”

The Parity NFT Marketplace is powered by Aventus Network, a Ethereum layer-2 blockchain. The marketplace has been designed to be easy-to-use for anyone from crypto-natives to those who have never before bought or sold any crypto or NFTs. The Aventus Network ensures security, scalability, speed, lower costs, and much more environmental sustainability than typical for Ethereum transactions.

Co-founded in 2017 by Forbes 30-Under-30 listee Alan Vey, Aventus Network will bring its blockchain technology to NFTs with the Parity NFT Marketplace.

“We truly believe that NFTs have significant potential to revolutionize how revenue is distributed in the world of sports, art, music and beyond,” Vey said.

“This new partnership demonstrates the power of blockchain beyond business and finance as a tool to bring meaningful change. In the case of the Parity NFT Marketplace, blockchain can improve how income is distributed in professional sports – providing women athletes with a new, independent revenue stream.”

Globally, NFTs sold collectively for more than $40B in 2021 and are among the most talked-about sectors of e-commerce, with many NFTs increasing in value exponentially. Given this momentum, the Parity NFT Marketplace has aggressively positioned women athletes as early adopters of the technology, effectively turning the typical timeline for women’s sports on its head.

Parity is a groundbreaking online sponsorship platform created to close the gender pay gap in sports. Founded by former leaders on Wall Street, Parity drives revenue to women athletes by using proprietary data analytics to thoughtfully match athletes with impactful brands and causes. With a current roster of more than 700 athletes from 40 sports and 20+ corporate partners, Parity is revolutionizing the financial model for women athletes. To learn more, visit www.paritynow.co.

Aventus Network is a layer-2 blockchain protocol that lets any organization build on the Ethereum network without the typical limitations of speed, scalability, and price. Co-founded in 2017 by Forbes 30-Under-30 listee Alan Vey, Aventus Network makes building on Ethereum accessible for businesses and decentralised platforms through fairer transactions for all — enabling the broadscale adoption of public decentralised blockchain through blockchain interoperability. To learn more, visit: https://www.aventus.io/.

VereNFT is the whitelabel NFT platform & service provider that empowers brands and companies in the creation of their own NFT marketplaces. To learn more, visit: http://www.verenft.io/ or contact info@verenft.io